A few weeks back, Mike and Crystal met with Anthony Davis, Jounalist for Canadian Business Magazine.

Canadian Business was interested to learn the details behind the tremendous success we’ve had with WingsnBeer.com and what the future looks like with our giant leap in the United States.

The hard copy article hits news stands across the country on August 2nd. Make sure you get your own copy or go ahead and keep reading!

Could this Calgary dot-com for finding cheap chicken wings succeed in America?

Hot parm. Butter curry. Louisiana garlic. Those are some odder chicken-wing flavours available at pubs in Canada—if, in your salivating lust, you can find the places that serve them.

It won’t be as hard as it used to be, thanks to a startup called WingsnBeer.com. Launched on a lark to help people find deals on chicken wings in Calgary, the improbable business is now spreading continent-wide.

CEO Michael Wynn, 39, and some curling teammates found themselves craving wings after their first game together in 2005. But as they were newcomers to the city, “we had no clue where to go,” Wynn says. A web search produced only a rudimentary, outdated list.

A graphic designer by trade, Wynn set up a site called hotwings.ca offering local pubs free listings. A few years later, someone on a Calgary hockey forum mentioned the website and traffic suddenly spiked. It dawned on Wynn that it could be monetized. Today, along with the free listings, Wingsnbeer.com sells tiered monthly subscription packages to bars and restaurants for enhanced exposure. And with 43,000 unique visits every month in Calgary alone, the eateries increasingly see it as a worthwhile marketing expenditure.

But is the model scalable? Wings have become a top-selling finger food in North America, trumped only by nachos in terms of restaurant snack-food sales. In the U.S., chains such as Buffalo Wild Wings and Wing Zone now compete with McDonald’s, which is testing chicken wings in some locations.

“Canadians like chicken wings, but Americans love chicken wings,” says Crystal DeCnodder, 32, who last January left a career in the petroleum industry to join Wynn and partner Paul Neider in the new venture. Already featuring listings in Toronto, Vancouver and Winnipeg, they renamed and relaunched the website in March to better chase the U.S. market. As the name suggests, the site now also offers information on which craft beers are served too.

To help get American restaurateurs and brewers clucking about the website’s potential as a marketing platform, DeCnodder is heading to Buffalo, N.Y., in August for the National Buffalo Wing Festival. It was in Buffalo, in 1964, that Teressa Bellissimo, then co-owner of the Anchor Bar, fried up some chicken wings and coated them in hot sauce as a late-night snack for her son and some friends. When they wolfed them down, Buffalo wings became a barroom staple.

“A lot of pubs and restaurants don’t actually own their own websites,” says DeCnodder. For as little as $25 a month, she says, WingsnBeer.com gives restaurants a portal to display their offerings. As a bonus, the site attracts an unusually motivated clientele. Says DeCnodder: “People that are on our site are actually physically looking—usually the same day or the next day—to go out for wings.” 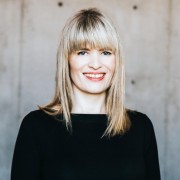 Crystal DeCnodder is a keynote speaker, social media, and digital marketing expert and is a partner at Full Blast Creative, a creative digital marketing and web design agency in Calgary, Alberta. When Crystal is AFK, she enjoys skateboarding, guitar, travel, and time with family and friends.